You are here:
FeaturedWeb Design & SEO 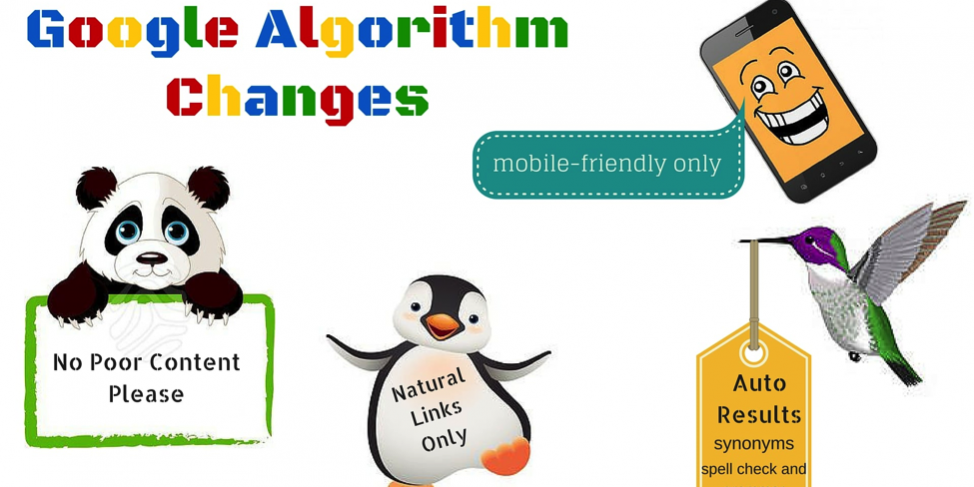 Google.com is the most popular the search engine there is, and there’s really no need to try to introduce Google. When compared to any other search engine, Google gives the most relevant search results and that is the reason why it became like a synonym of the internet.

There are more than one billion websites on the web. Among those many websites, getting precise results for your search is very easy on Google, thanks to the complex algorithm the tech giant uses.

This algorithm is the main focussing point for marketers to get success in online marketing. And the algorithm is changed frequently in order to give better search results to its users. In this year, 2016, there are some changes made and let us see what the changes are and how can you get good results over the changes. And before that, let me explain you how the google’s search works, in brief.

There are three phases in the entire process of search engine working. They are: Crawling and Indexing, Algorithms, and Fighting Spam.

There are more than 60 Trillion web pages in the web and the number is growing constantly. Google crawls the entire web and follows the links from page to page. Website owners can choose whether their sites get crawled. Later, Google sorts the all web pages as per the content, and other factors and keeps all the web pages in the Index. This process is called Indexing.

Algorithms are computer programs that look for clues to give you back exactly what you want. Google wants to give precise results to its users. All the algorithm is the idea of google’s engineers on what kind of results the users would like to get. So they write several software programs that would work on clues to better understand the search string. The clues including spellings, and synonyms of words used etc.

With all the clues gained, Google pulls results from the Index. And then, it ranks the results based on more than 200 factors. But, no one knows what exactly the factors all are. We know only some of the factors like the website quality, freshness of the content, and user context etc. And it produced results in the order of ranks in 8 different forms.

This entire process happens in just 1/8th of a second.

Google does not entertain any spam content in its results. Content which is purely keyword stuffed, copy-pasted from other sources or contains meaningless phrases should be penalized and eliminated from the results. For that, google uses algorithms. To prevent spammers, Google keeps these algorithms confidentially. This is the reason why no one knows exactly what the factors that google considers for ranking web pages and penalizing the spammers. And every year google make hundreds of algorithm changes for giving better experience to its users.

As said earlier, google does not let its search algorithm out. It frequently changes the algorithm depending on various things. Minor updates are not announced whereas it makes a public announcement about a major change and names the update. Looking into the recent past, three major updates that changed the entire rankings and made the SEO world go crazy. And these updates are named Panda algorithm, Penguin Algorithm, and HummingBird Algorithm.

Panda update was first launched on February 23, 2011. The purpose of the Panda was to show high-quality websites higher in the search results and boot out the websites that may be of lower quality. It affected the content farms which made many web pages with information stolen from other sites. Many websites were affected by this update and they sought solutions to recover from Panda. Google’s employee Amit Singhal wrote a blog post which gives an overwhelming checklist of things to check whether their website is of good quality. This checklist includes some points like:

And many other points. So website administrators should look into these things and reform their content. Google refreshes its Panda algorithm every month and those websites that are reformed would be given ranking as per the algorithm.

On April 24, 2012, Google launched its Penguin Algorithm. This update focuses on the backlinks of the websites. It punished the websites that created unnatural backlinks to get good ranking on google.

The links are like votes for your website. When someone impressed with your website, they give a link to your website on their website. If these links are coming from small websites, those links won’t be counted. But if such links are in a huge number, then there would be definitely a change in the ranking.

John Mueller says that this Penguin Algorithm is a site-level algorithm. So, if this finds more number of untrustworthy backlinks to your website, Google’s trust in your website would be impacted badly and your site will be punished.

The only remedy to recover from the Penguin is to remove the unnatural backlinks to your website. If not you, you can ask google to remove them by using a disavow tool.

Google made its announcement about HummingBird algorithm on 26th September, 2013. But it said that it had been using the algorithm for the past one month. And the later refresh of this algorithm was on October 4, 2013.

This algorithm and its purpose is entirely different from the previous algorithms i.e Panda and Penguin. This mainly focuses on understanding the query of the user. For example, when someone searches for: “How many Google searches per day?”, HummingBird would be able to understand that the user wants to get an answer for his question and it shows the results that would answer the question.

These kind of changes enhances the features of Google like Voice Search and Search by image. So, to get good ranking over this update, it is suggested to maintain content that shows solutions to users’ queries.

With all these changes, the ultimate goal of Google is to encourage the webmasters who provide useful content to the netizens and to reward the websites that are made of best-in-class quality. So, it changes its algorithms in par with the daily changing requirements of users. In the process, in this year, Google has announced several changes so far. They are:

This core quality algorithm has shown a volatile fluctuation in the desktop and mobile search rankings. The risk levels were too high in second week of the month due to the Google Core Quality Rank Algorithm. With a confirmation from John Mueller, Barry Schwartz, a Search market expert, has published that “Google Panda is now part of Google’s Core Ranking Algorithm”.

Google plans to remove the classic sidebar ads in the SERP on Feb 19, 2016. It was predicted that this change would result some four ads at the top of the results page. And this would impact the small businesses and the Google’s income.

This minor update caused the risk level index to spike to a level of 93 during the week through May 6th to May 13th. But as this was a small update, Google made no announcement.

This is the latest update of Google’s search algorithm. The number of mobile users are increasing day by day. Due to the smartphone revolution, the web traffic from mobile phones increases rapidly. For giving better experience to its mobile users, google gives more priority mobile-friendly websites.

With all that said, we cannot predict what would happen in the SEO world at a moment. Even a small update can make a big changes and your website rank will be changed. Yet, there are some practices that can make your website quality and useful for the users. Among them all, producing quality content is the best thing that one can ever do.

And coming to the recent update, keeping the point of Mobile-friendliness is very crucial. Marketers should remember that most of the web traffic is coming from mobile phones only. And they should make their websites optimized for mobile gadgets like cell phones and tablets.

Hello mates!! I am Sumit Ghosh, a huge social media fan, a nerd, a geeky programmer and owns a digital marketing firm, successfully running for over 9 years. I also started the SocioBoard Blog to provide knowledge to new startups and entrepreneurs whose social marketing campaigns failed to generate ROI.

Podcast Ep #80: Identifying & Understanding the Seasons of Any Business to Maximize Profits
September 25, 2017

Doug Depte: How to Build a Million Dollar Real Estate Portfolio While Working Your 9to5
May 29, 2017

#62: Making Hard Decisions in Your Business Plus Bonuses
April 3, 2017
Follow Our Tweets
Tweets by BetterSuccess
Go to Top