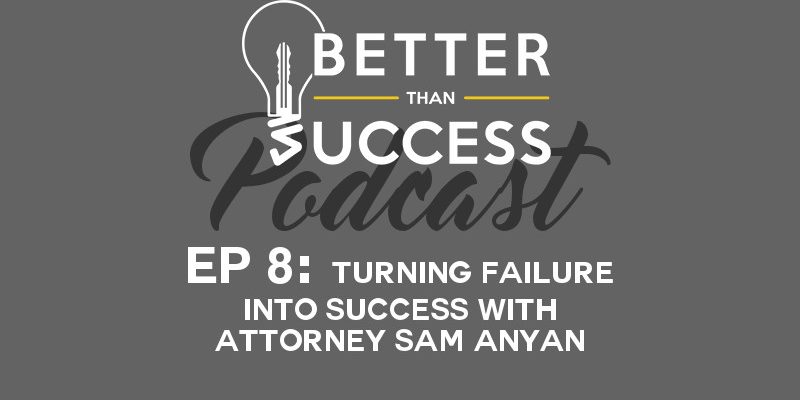 In this episode of the Better Than Success Podcast, your host Nikki Purvy interviews attorney Sam Anyan about how he turned failure into success.  Listen using the player below.  Read about this episode below the player.

Mr. Anyan has been featured on MSNBC as well as a number of nationally circulated publications. He was also named ‘A Lawyer on the Fast Track 2011’ by the Legal Intelligencer publication, an honor bestowed to Pennsylvania’s Top Lawyers under 40 each year. Mr. Anyan strives to give his clients the compassionate, caring, personal service and attention they deserve. In 2005, Mr. Anyan received his Juris Doctorate from Howard University School of Law. Mr. Anyan earned his LL.M. degree in trial advocacy from Temple University School of Law in 2008, graduating with honors.

In this interview we discuss how to turn failure into success. Sam shares how he used failing the bar the first time to his advantage. He then saw his new predicament as an opportunity to position himself for success. We also talk about what makes lawyers so well-equipped for success. Sam shares his daily habits that contribute to a productive day and he talks about how he developed these habits.

Download the transcript for the Sam Anyan interview here.

Navigating L&I: Get Your Building Permit Approved on The First Try with Jane Ellen
November 23, 2019
Risk Proof Your Investments: Understanding and Negotiating Insurance Claims Like An Expert
August 23, 2019
Using Creative Financing for Commercial Real Estate with Sarah Stroney
July 13, 2019
Ep# 137: What You Need to Know about Real Estate Inspections ft Corwin Jackson
May 29, 2019
Top 3 Insurance Tips and How to Airbnb like a boss with Ty and Jason
May 23, 2019
How To Keep Your HVAC Costs Low When Doing Your Rehabs with Jermaine Howard
May 15, 2019