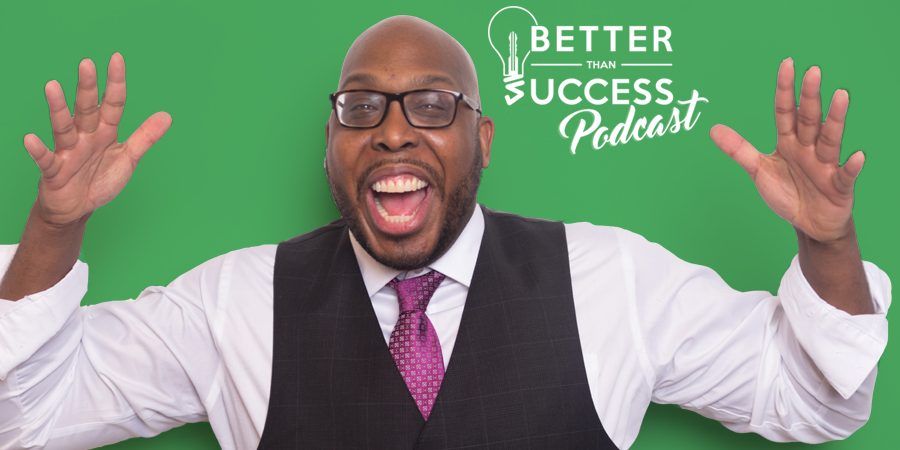 In this episode of the Better Than Success Podcast, Nicole Purvy talks with entrepreneur and online school professor, Andre Hatchett. Andre is a nationally acclaimed entrepreneur and philanthropist. Andre is the owner of The Black Real Estate School, Andre’s Notary School, The Notary Business School and co-founder of Buy Black NYC.

Known as “Mr. Buy Black,” Andre is the driving force behind the national Black Business Challenge social media campaign that encourages African-Americans to patronize Black-owned businesses, record feedback about their experience via their cell phone, and then post the footage online using the #BlackBusinessChallenge hashtag. The campaign, which was initially planned for 30 days but has increased to 395 days, garnered the attention of media outlets and sparked mass appeal in Black economics.

How to make Six Figures with an Online School

Hardcore entrepreneurship and hardcore black people was Andre’s motive behind his drive to educate others, “That’s my life, thats my brand”.

Starting his business mentality by selling lemonade and shoveling snow at a young age, Andre knew he always wanted to be limitless financially. Before becoming an entrepreneur he was a teachers aide for autistic children and youth basketball coach. Moving on, Andre eventually left his 9-5 job to start selling real estate. After having some ups and downs in the real estate business Andre reassessed his focus to what was his ultimate passion, teaching and having the desire to inspire people. He then decided to start a notary school when he was 23 years old.  Only having a few hundred dollars while starting his online school, the school is now nationwide in all 50 states and is also a six figure business. “You don’t have to be overly passionate about everything that you do. Some things just work” (10:36) Creating a six figure business didn’t happen overnight, Andre explains the long hours and sleepless nights he had to encounter while building his brand. Not having a full blueprint and only knowledge was a challenge but he knew he could do it. Offering free services such as webinars and many more before becoming fully profitable was worth the wait, “Free stuff with people who understand reciprocity pays off” (20:46). Some shortcomings Andre faced on his road to success was the ability to focus. Trying to balance an online school, real estate became a huge distraction. Cutting off all distractions, Andre learned that he had to focus on his online school and that only.

“Success comes from having the ability to focus, you have to lock in and go hard”- Nikki Purvy

“That was the one thing I wasn’t doing and when I did lock in I cracked 6 figures by putting off making extra money and focusing..”- Andre Hatchett

After reaching one of his long term goals, Andre was able to expand and start his real estate business, http://buyblacknyc.com .

Listen on your iPhone: betterthansuccess.com/itunes

Listen on your Android: betterthansuccess.com/google

There is also a recorded video of the full interview, Watch now .

Subscribe to Better Than Success on iTunes and please consider leaving a rating or review!

Android users can listen to Better Than Success on Stitcher

Wholesalers Association
December 7, 2020
Navigating L&I: Get Your Building Permit Approved on The First Try with Jane Ellen
November 23, 2019
Risk Proof Your Investments: Understanding and Negotiating Insurance Claims Like An Expert
August 23, 2019
Using Creative Financing for Commercial Real Estate with Sarah Stroney
July 13, 2019
Ep# 137: What You Need to Know about Real Estate Inspections ft Corwin Jackson
May 29, 2019
Top 3 Insurance Tips and How to Airbnb like a boss with Ty and Jason
May 23, 2019
Go to Top