The Introvert’s Guide to Networking for Businesses

You are here:
Marketing 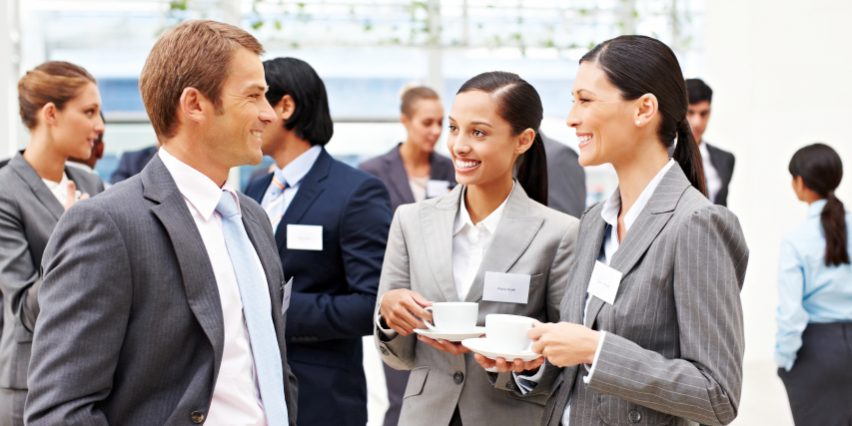 I was very eager to write this post because I hate the word and notion of “Networking”, although many of my friends and associates think that I am an excellent “Networker”. By all definitions of the word, I probably am a great networker because, as my business’ only sales person, we were able to quadruple our sales last year through networking and referrals only. But yet in still, I despise the concept of “Networking”. First I will tell you why I hate “networking” and why you should too and then I will tell you how to be a great networker and bring in more sales for your business without “Networking”.

I hate the notion of “Networking” for 2 Reasons

The use of the word “Networking” sounds manipulative and dishonest. It implies that the only reason that a person is willing to meet and socialize with a group a people is because they want something out of it. There are times to do things because you want something out of it but it shouldn’t be when you are enjoying the company of people. If you do not enjoy the company people then you should skip the networking and be home where you are most happy and instead, spend the time working on your business (this is ok and Ill explain in a little). And if you are in the presence of ‘bad’ people then, I’m sure you wouldn’t enjoy that either so I think you should skip that event as well.

The modern day notion of ‘networking’ implies that you must be an extrovert to grow your business. But I’m sure that most introverts really struggle with networking and can possibly feel that they’re not “good enough” when lacking in the area. The reality is that some studies suggest that introverts make better business owners and CEOs. Jim Collins noted in his highly revered book “Good to Great”, where he published his findings after studying and interviewing hundreds of key people at the top companies, that the ‘Great’ companies, as compared to the ‘Good’ companies, were lead by people with characteristics of introverts such as “reserved” and “understated”.

Our culture lauds this idea of “networking” around that if you want your business to be successful, then it’s something that HAS to be done even if you don’t feel comfortable doing it. You have to intentionally put on your best business gear and stand in a room full of strangers and just walk right up to each and every one of them, force your conversation of small talk on them and, voila you have new a new customer. 1) It, the new business part, doesn’t work like that and 2) this doesn’t sound fun at all. It sounds anxiety ridden. And I’m cool, I will never ‘network’, if that’s what you call it. And If I find myself at a networking event because I’m someone’s wingman (wing-woman), I always find a seat in the corner and stay there the whole night (Don’t get my behavior here confused with that of a party, cause I am the center of attention at a traditional party).

How to Network Effectively without Actually ‘Networking’

Although, I hate ‘Networking’, I brought in quadruple the amount of business in 2016 than 2015 strictly off referrals and ‘networking”. So how did I do it?

1) I Socialized with People Because I LOVE People

When I go out and want to meet people, it’s because I love people. I love to be around them and I love talking to them. I don’t necessarily want to talk about my business or theirs. I just want to talk and learn about them. I want to learn more about with whom I’m talking, the person, not necessarily the business. I generally have a real interest in people. If I meet someone and it happens to come out what I do for a living then there it is. But, I’m not fishing for it. Principle #4 in Dale Carnegie’s best selling book “How to win Friends and Influence People” states “Become genuinely interested in other people”. I think that my genuine interest in people instills trust in people that works for us, while we sleep.

Yes, you could meet your next big client or customer at the next networking event. But if you have essential work to do such as, a proposal, order fulfillment, website updating, please prioritize and tend to your work. I never put ‘networking’ over essential traditional work tasks. Meeting the next big client means nothing if you’re not prepared. Remember that preparation plus opportunity equals success. If your traditional work is preparation and opportunity is the big prospect at the networking event then lets remember what comes first in the equation…Preparation!

When we started Lidyr, I kept my head down and worked sooooo hard on soooo many websites while ‘working ON the business’ on the side, and by “on the side” I mean I didn’t have time to do any networking events just social media and meetings. It was very draining. But once I got so good at web design because I put in well over my 10,000 hours, I was able to delegate my style and approach that was unique to the Lidyr to a junior designer. That freed up a lot of my time so now I can ‘network’ if I want. But I could only delegate that responsibility only after I got REALLY good at web design.

The times when I’ve gone to networking events and people have insincerely followed up with me, it’s so awkward. I feel obligated to go to lunch with them just because they asked and then, it just turns out to be a waste of time. So now, I just don’t because I charge $125 an hour for coaching sessions and my time is too valuable unless you can give me a real meaningful purpose to the lunch. This doesn’t mean avoid follow-ups. But if we are connecting with people that we are genuinely interested in, then it becomes a social event with a new friend. We can;t charge our friends for having fun with us now can we? And those dates are never a waste of time. If we just so happen to talk business then great! But if not, I have one more friend who may or many not refer me.

4 Ways To to Get Good at Public Speaking Really Quickly
January 18, 2018

5 Internet Marketing Tactics That Can Boost Your Startup’s Launch
November 10, 2016